For an update on this project, see the following reports: 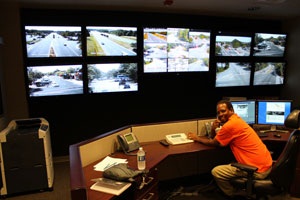 The project also included the installation of a new Traffic Management Center (TMC), located in the Public Works Department at 6850 Millhouse Road. The TMC receives feeds from closed circuit television cameras trained on major arteries, allowing operations staff to track traffic conditions at key locations in the community. The TMC is equipped with eight monitors to view the traffic flow through 16 different intersections that are equipped with traffic cameras. The Town of Chapel Hill does not archive or retain any of the images from the traffic cameras. Similar systems have been installed in municipalities across NC and the United States. Benefits of these systems include enhanced roadway safety, decreased traffic congestion during special events and rush hour, faster programming for real-time adjustments to traffic signals, reduced travel time, and improved air quality.