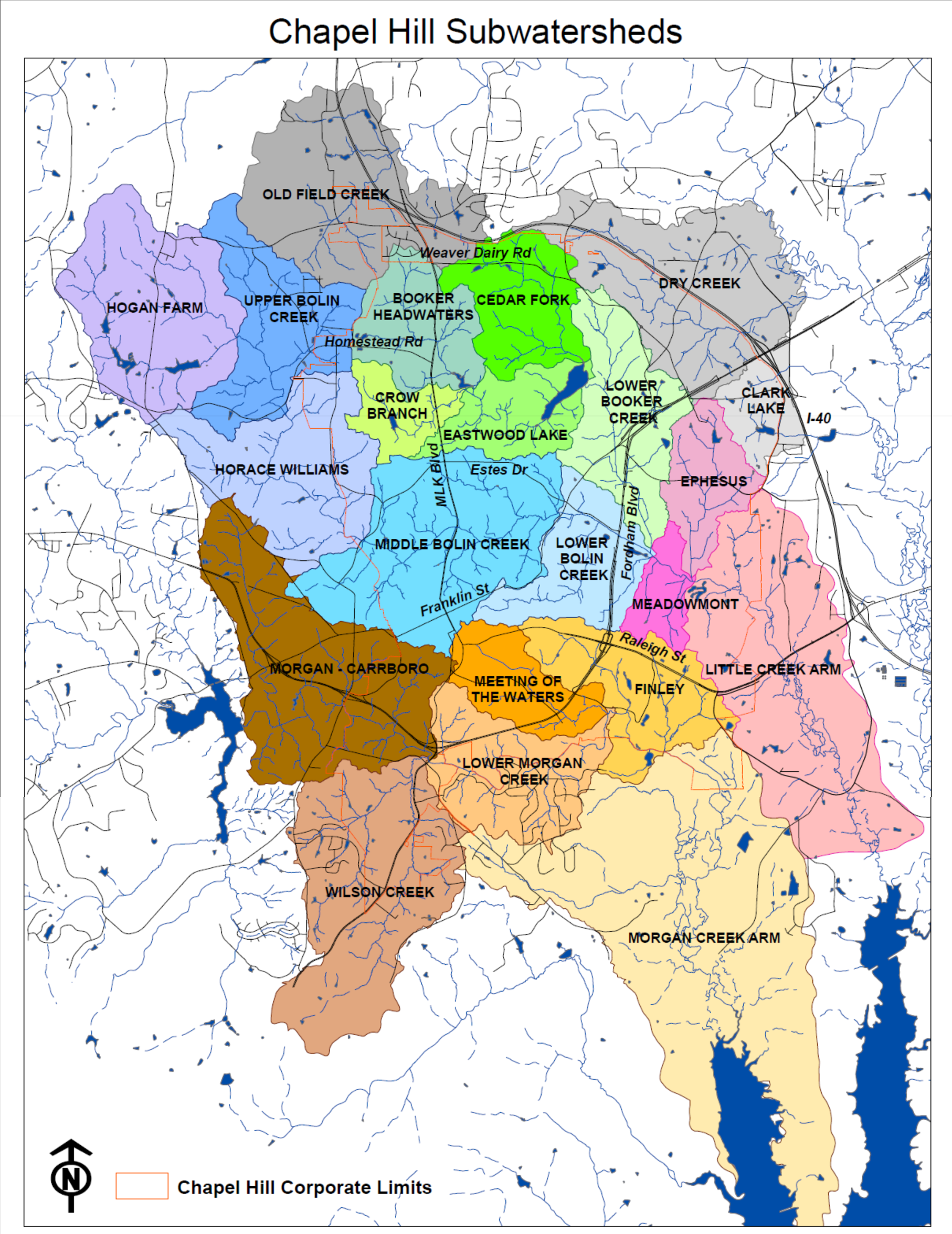 Sorry for the mess! This page is under construction.

A watershed is an area of land where rain water and snowmelt flow to a common body of water. Watersheds can be as big as an entire river basin or as small as a tiny creek area. In Chapel Hill, we are in the Jordan Lake watershed, which is part of the Cape Fear River Basin.

We All Live in A Watershed Map (Large pdf)

Haw River
The Haw River begins in northeast Forsyth County and flows 110 miles to where it converges with the Deep River, 4.2 miles below the Jordan Lake Reservoir dam.  The Cape Fear River begins at this point.  Tributaries of the Haw River and Jordan Lake flow through Guilford, Rockingham, Caswell, Alamance, Orange, Chatham, Wake and Durham counties.  Almost one million people are part of this watershed.  Sedimentation, wastewater, agriculture, trash and suburban and urban runoff impair its waters.

Maps of the Haw River Watershed

Mark Chilton's Wandering through the NC Piedmont Blog: History and Mills of the Haw

Jordan Lake supplies drinking water to approximately half a million people; provides habitat to one of the largest populations of bald eagles on the east coast; and offers recreational opportunities such as swimming, boating and fishing.  Yet Jordan Lake is not a healthy body of water and needed rules to improve its water quality and to protect human and animal life.  Learn more by clicking on the links below. 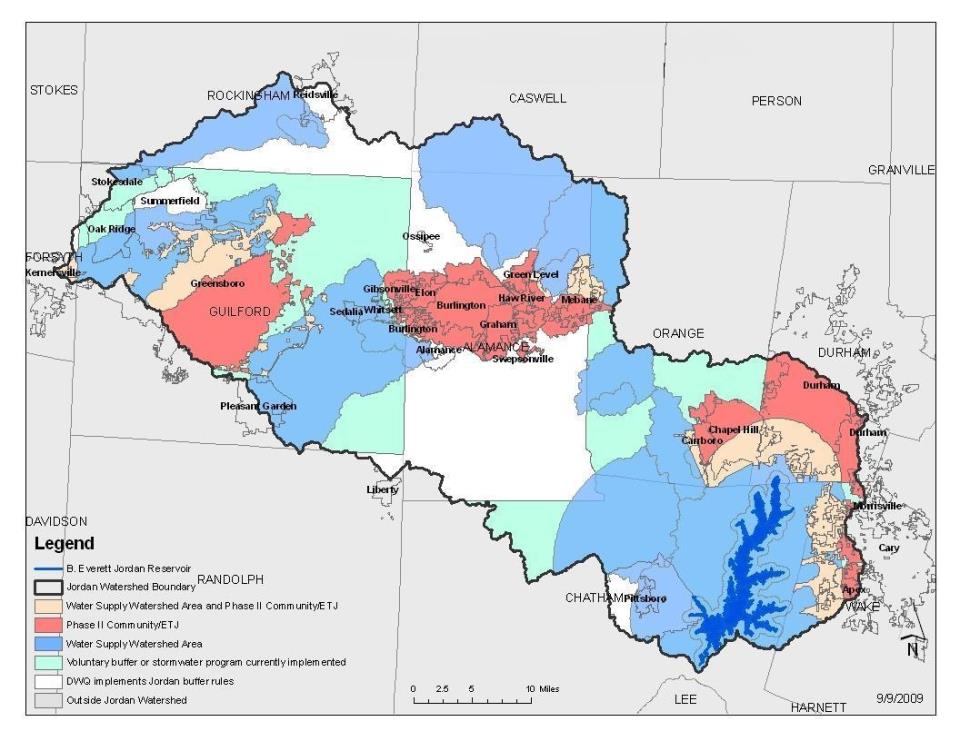 "B. Everett Jordan Dam and Lake (Jordan Lake) are under the stewardship of the U.S. Army Corps of Engineers (USACE), Wilmington District. The Jordan Lake project, originally known as New Hope project is located in Chatham County, North Carolina, 2.4 miles northeast of Moncure and 25 miles southwest of Raleigh on the Haw River in the upper Cape Fear River Basin.

Jordan Lake was authorized by Public Law 88-253, enacted by the 88th Congress on 30 December 1963. House Resolution 8667 authorized the project in accordance with the recommendations of the Chief of Engineers in House Document 508, Eighty-seventh Congress. The approved report recommended construction of an earthen dam with a multi-level Intake Tower in the interest of flood control, water supply, water-quality control, recreation, and other purposes.While hydropower was considered as a potential project purpose in early studies, it was later dropped because of local dissention. Navigation was never considered as a project purpose.

A contract to initiate construction was awarded on November 5, 1970 and after considerable litigation, construction was completed and Lake first reached normal pool level of elevation 216.0 feet mean sea level (msl) on February 4, 1982."

--From Introduction, Army Corps of Engineers: ENVIRONMENTAL ASSESSMENT And FINDING OF NO SIGNIFICANT IMPACT  Modification and Alteration of B. Everett Jordan Dam and Lake for Addition of Non-Federal Hydropower, October 2010

US Army Corps of Engineers 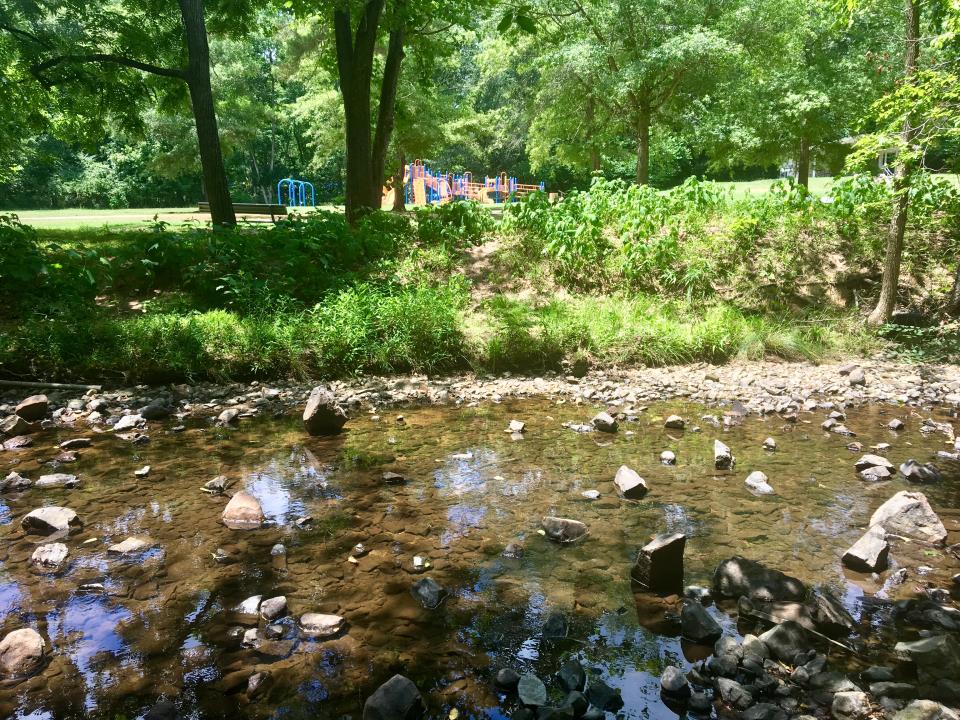 Nature found along the creek (Friends of Bolin Creek) 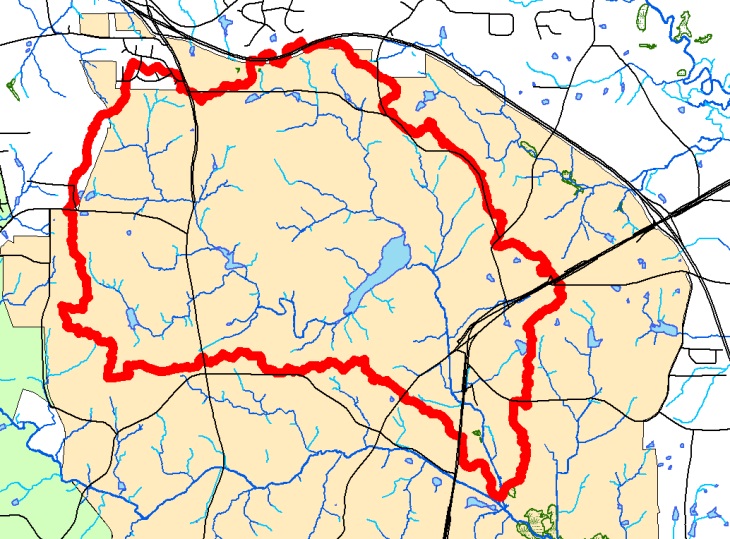 There are two private lakes - Lake Ellen and Eastwood Lake - in Booker Creek and several smaller ponds scattered throughout the watershed.

The Town has a multi-year subwatershed study underway for the Booker Creek watershed as part of its Stormwater Management Master Plan.  http://bookercreekplan.org/

Bolin and Booker Creeks merge to form Little Creek on the east side of Town, near the end of Emory Drive and east of Rainbow Soccer Fields.  Little Creek flows into the Upper New Hope Arm of Jordan Lake.

Much of Little Creek’s water quality is influenced by upstream activities in the watersheds of Bolin Creek and Booker Creek. But what dominates the biology of the creek is the geologic area it flows through: the Triassic Basin. This is an old valley that has filled in with fine silts and clays.

Streams flowing through this area have very different characteristics than those elsewhere in the Piedmont, different enough that the NC Division of Water Quality (DWQ) does not have an index for rating biological conditions in Triassic Basin streams. Little Creek and small tributaries in the Triassic Basin have very shallow slopes, slow-moving water, and habitats more characteristic of coastal lowlands than do streams in the rocky Piedmont.

Little Creek Bottomlands and Little Creek Waterfowl Impoundment: Federal property in this area is leased to the State of North Carolina and is designated by the North Carolina Wildlife Resources Commission (NCWRC) as Permanent Wildlife Lands and managed as game lands. In addition, this area is managed as a waterfowl sub-impoundment and is open to public hunting and fishing by licensed individuals in accordance with all NCWRC Inland Fishing, Hunting, and Trapping Regulations. (ACE 2007) 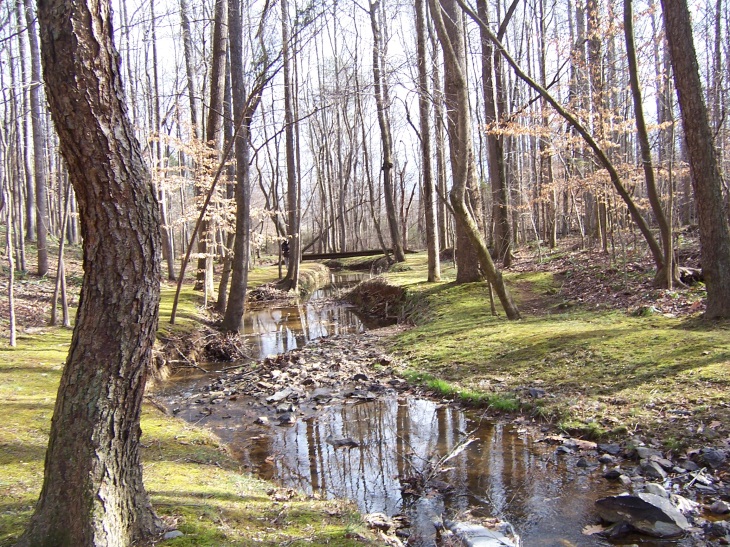 Godfrey, Michael A.  1997. Field Guide to the Piedmont The Natural Habitats of America's Most Lived-in Region, From New York City to Montgomery, Alabama. UNC Press. 536pp.

Recreation
Much of the land along Morgan Creek is conserved and maintained by the NC Botanical Garden and The NC Botanical Garden Foundation. Some of these areas are open to the public; other areas have restricted use. Please respect restrictions and private property as you plan your outings.

Orange Water and Sewer Authority (OWASA)
University Lake is one of OWASA’s primary drinking water sources. Sewage from OWASA customers is gravity fed or pumped to OWASA’s wastewater treatment plant on Mason Farm Road where it is treated and released into Morgan Creek.

Terres, John K.  1993. From Laurel Hill to Siler's Bog: The Walking Adventures of a Naturalist. University of North Carolina Press.

Many small streams on the eastern side of Chapel Hill flow to New Hope Creek, which flows into the Upper New Hope Arm of Jordan Lake. Those include Old Field Creek in the Eubanks Road vicinity, Dry Creek, partially located behind East Chapel Hill High School, and the stream leading from Clark Lake off Pope Road on the Durham border. A portion of New Hope Creek’s watershed is in Durham.

USGS Monitoring Station - How much water is flowing through New Hope Creek?

Meadow flats is a large wetland area northeast of the intersection of Eubanks Road and Old NC 86.

Duke Forest - There are many pieces of this experiment and research forest scattered across the middles of Orange and Durham Counties.  Many, but not all, parts of Duke Forest are open to the public.