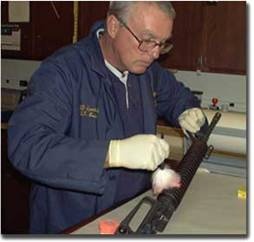 All evidence gathered is submitted to the Evidence and Forensic Unit. The staff processes the evidence looking for information to help solve the crime. Some processing, such as DNA testing can not be done at the Police Department and is forwarded to laboratories at the SBI. The staff is also responsible for securely storing the evidence from the time it is collected until it is used in court.

Finally the Evidence and Forensic staff testify in court about the evidence gathered and processed. They often have to explain to juries the intricacy of their work, such as how fingerprints are collected and identified.