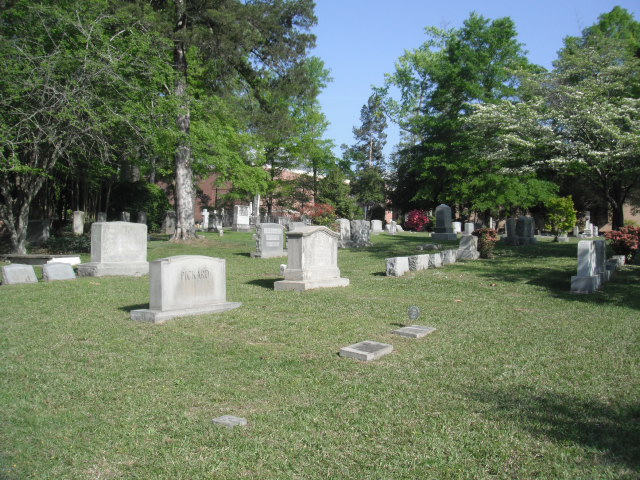 The Old Chapel Hill Cemetery, originally called the College Graveyard, is located on the campus of the University of North Carolina at Chapel Hill. It was originally used for internment of university students who died during their time at UNC. The rock wall around the cemetery was built in 1835.

The Old Chapel Hill Cemetery is on the National Register of Historic Places, [1] and it is currently owned and maintained by the Town of Chapel Hill.

The burials in the Old Chapel Hill Cemetery are generally well known, however, burials in the African American parts of the cemetery were often marked only by a field stone, rather than a headstone with an inscription. Because of this, many of the stones, not recognized as grave markers, have been removed or relocated, leaving these sections with many unidentified graves. Most of those buried in this section were either slaves or University laborers, while others were the slaves of faculty members or other Chapel Hill residents. Later graves belong to freedmen who may have worked at the University.

Some of the known African American burials include those of freedwoman Nellie Strowd Strayhorn, who with her husband was able to successfully build a home and live in Chapel Hill during Reconstruction, a time of intense racial violence. Others include Wilson Swain Caldwell, a slave of the prominent Caldwell family; George Barbee, one of the oldest graves in the section; and Dilsey Craig, an enslaved person belonging to the Phillips family.

The white section of the cemetery houses burials of prominent Chapel Hill residents including faculty and staff of the University. There are also enclosures used by the Dialectic and Philanthropic Societies for their member students. Some of the better known individuals buried in the white section of the cemetery include Joseph Caldwell, Nancy Hilliard, the proprietor of the Eagle Hotel, and Cornelia Phillips Spencer, among many others.[2]

The African American section of the cemetery has experienced several instances of vandalism, due in part to the issue with headstones lacking inscriptions and therefore not being recognized as graves. In the recent past, the western area of the cemetery, Sections A and B, was used as parking for visitors attending the 1985 football game against Clemson. The un-inscribed stones used to mark graves have also been used to help repair the stone walls that divide and enclose the cemetery. In 1999, the Black Student Movement at UNC lobbied for repairs to the headstones in the African American sections, as well as better acknowledgement of those buried there through the erection of a monument.[3]

Preservation Chapel Hill worked with Environmental Services, Inc., to complete archaeological surveys of the cemetery in 2010, 2012, and 2013. The 2010 survey focused on identifying unmarked graves within a portion of Section B, one of the historically African American sections of the cemetery. Geophysical surveying, ground penetrating radar, electrical resistivity, and soil density testing were all used to locate unmarked graves. Ground penetrating radar allows the surveyor to detect changes in the soil that indicate a disturbance that could be a grave shaft. Electrical resistivity similarly detects changes in the soil indicative of a grave shaft or of the metal hardware of a coffin. These methods resulted in the identification of 62 potential unmarked graves in Section B.[4]

Another survey took place in 2012 with the goal of identifying unmarked graves in the remaining portion of Section B, as well as Section I. Again, ground penetrating radar and soil density probing were used. This survey identified and additional 199 potential burials in the areas surveyed, with the majority of these being located in the historically African American Section B.[5] 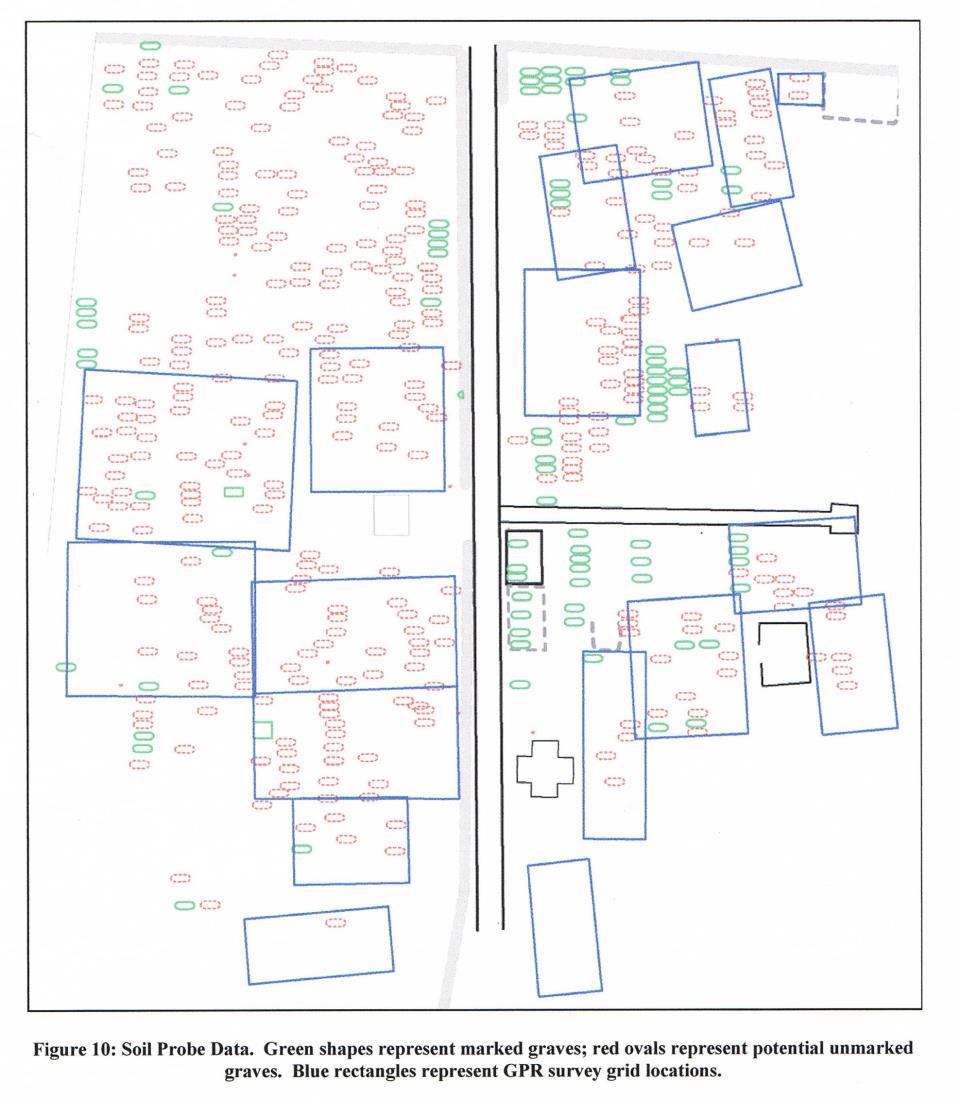 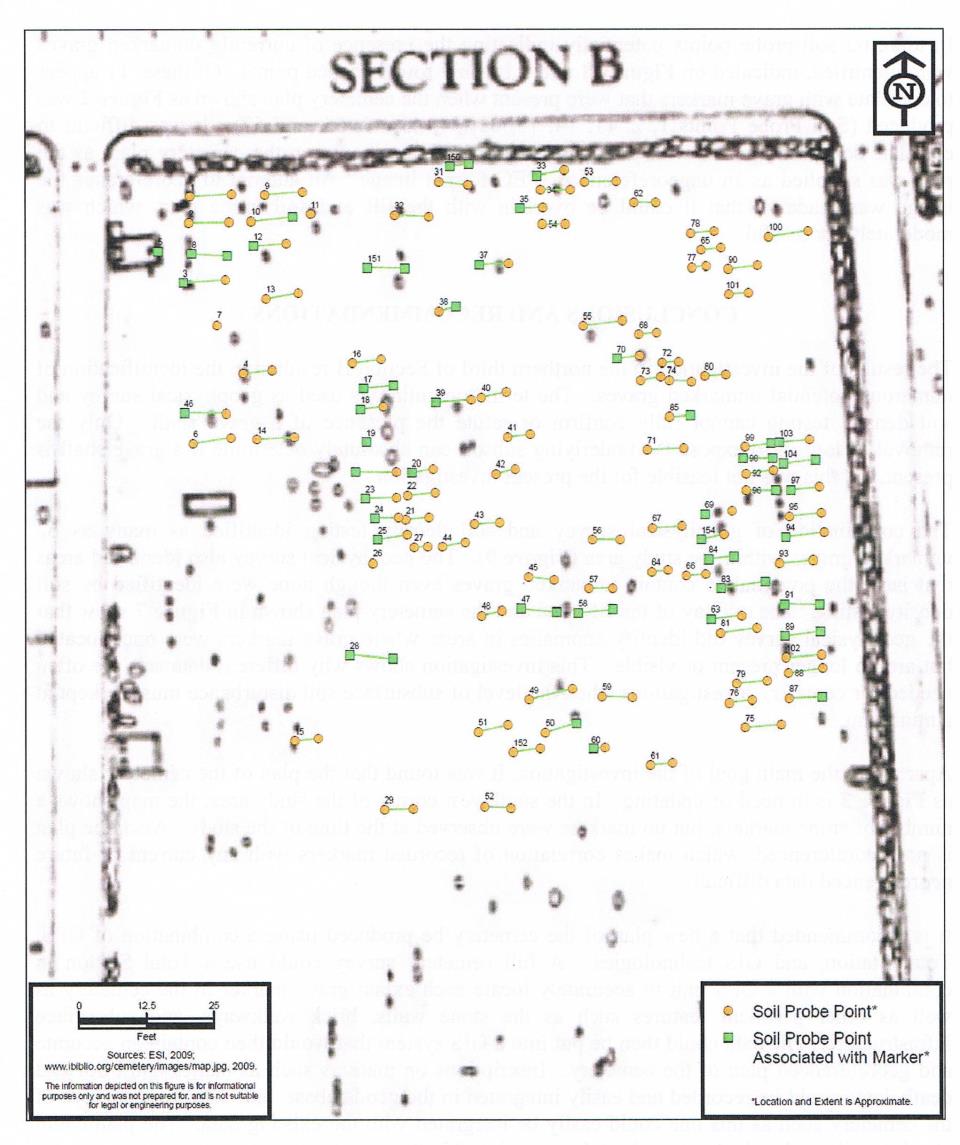 Investigation of a Portion of Section B

Investigation of Portions of the Old Chapel Hill Cemetery, courtesy of ESI, Inc.