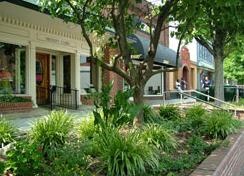 Streetscape is designed to enhance the pedestrian experience with sidewalks, crosswalks, lighting, benches, public art and plantings, along with other improvements in the public rights-of-way along Franklin and Rosemary Streets, including cross streets from Merritt Mill Road to Henderson Street. Since the Town established a Streetscape Master Plan in 1993, the Town has been rebuilding sections of sidewalk while incorporating many other improvements. Almost all Streetscape improvements have been funded with bonds approved in 1996 and 2003.

In 2006 the Town Council authorized funding for updating the 1993 Downtown Streetscape Master Plan and the Downtown Lighting Plan. A revised Master Plan was completed by Mikyoung Kim Design of Brookline, Massachusetts, and adopted by the Town Council in June 2009. Implementation of the revised Master Plan began with construction of the pilot project on West Rosemary Street between Nunn Alley and Mitchell Lane followed by lighting improvements and Streetscape construction in 2012 on West Franklin Street, between North Roberson and North Graham Streets.

For more information, contact Emily Cameron in the Public Works Department at (919) 969-5114 or ecameron@townofchapelhill.org.