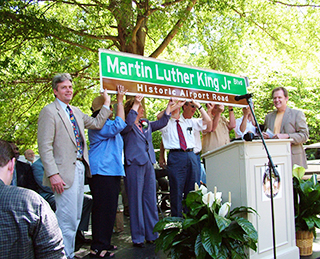 On May 8, 2005, the Town Council dedicated Martin Luther King Jr. Boulevard, which had been renamed from Airport Road. View the video (http://vimeo.com/83854787) of the ceremony and subsequent procession to Hargraves Center (where Dr. King had visited 45 years earlier – on May 8, 1960). 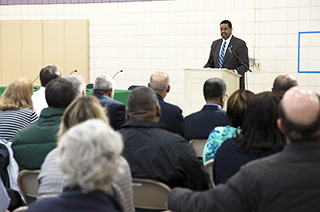 The Martin Luther King Jr. Day holiday was observed by Chapel Hill two years before it became a national holiday.

Town of Chapel Hill employees have held a special observance of Dr. King’s legacy for more than two decades. Usually held the Friday before the Monday holiday, the celebration was nurtured for many years by a dedicated group of Public Works employees led by Maggie Burnett and Fred Battle. At the urging of Town Manager Roger Stancil, the celebration expanded in 2012 to include employees of all Town departments. Each year, an employee committee plans activities to recognize Dr. King’s guiding principles of non-violence, brotherhood, justice, morality and action.

View Town employees reading the history of the local holiday celebration, as written by Maggie Burnett, who retired from the Town of Chapel Hill Public Works Department, at vimeo.com/151938590

Fifteen years after Dr. King's death, President Ronald Reagan signed a bill into law making the third Monday of January a national holiday celebrating the birth and life of Dr. Martin Luther King, Jr. But it was a tough time getting the bill passed. First a bill had to be introduced by a member of the House of Representatives. The Speaker of the House assigned the bill to a committee where the bill was discussed in detail. Meetings were held where supporters and opposers could discuss their positions. The committee then agreed that bill should be sent to a vote.

The Rules Committee scheduled a debate on the issue. The House of Representatives then voted on the bill. It passed the House with a vote of 338 to 90. Then it was sent to the Senate. Again the issue of the King Holiday had to pass through committees and public hearings before a final vote was taken. There were many who opposed the idea of holiday for Dr. King. America had only honored two individuals with national holidays - George Washington and Christopher Columbus. Many felt that there were other Americans that deserved a national holiday, such as Abraham Lincoln and John F. Kennedy.

One barrier to the confirmation was the Senator from Georgia who had denounced Dr. King as a communist. Others feared the King Holiday was meant as a way to make up to African-Americans for slavery. Others feared the cost of the holiday, with the extra overtime paid to federal workers who had to work on the holiday as well as millions to those federal employees who were paid for the day Senator Bob Dole pointed out to those critics "I suggest they hurry back to their pocket calculators and estimate the cost of 300 years of slavery, followed by a century or more of economic, political and social exclusion and discrimination".

It took many years for Congress to decide to celebrate the holiday. In the years leading up to the official decree, many African-Americans celebrated the birthday themselves with a few states declaring King's birthday a state holiday. The bill was finally passed by both the House of Representatives and the Senate and was signed into law on November 2, 1983. The first national celebration of the Dr. Martin Luther King, Jr. holiday took place January 20, 1986.

Local history was made on December 12, 1983, when the late Chapel Hill Town Council member Bill Thorpe moved the Council to adopt Ordinance 83-0-76 establishing a Town holiday on the third Monday in January in honor of Dr. King. He asked the Council to act quickly, establishing the holiday for the following month, to make a statement stronger than the federal government, which would wait until 1986 before observing the holiday. Chapel Hill’s ordinance was hotly discussed. Some council members were concerned that with a turnaround time of one month, the Town would not be able to adequately prepare and would be hurt financially.

A motion was entertained to postpone making a decision until the following year. But that motion failed. The Council would vote that day – December 12, 1983. The vote was called. The Chapel Hill Town Council enacted the ordinance – in an 8-1 vote – to establish the Town holiday in honor of Dr. King—initially on January 16, 1984, and subsequently on each third Monday in January. At that time, Chapel Hill was the first – or among the very first – communities in North Carolina to declare Martin Luther King Day a municipal holiday, giving municipal employees a paid day off.

This local holiday was observed two years before it became a national holiday. Town of Chapel Hill employees have held a special observance of Dr. King’s legacy for about two decades. Usually held the Friday before the Monday holiday, the celebration was nurtured for many years by a dedicated group of Public Works employees led by Maggie Burnett and Fred Battle. At the urging of Town Manager Roger Stancil, the celebration expanded in 2012 to include employees of all Town departments. Each year, an employee committee plans activities to recognize Dr. King’s guiding principles of non-violence, brotherhood, justice, morality and action.

There is a poetry contest, reading circles, an employee choir, and community improvement projects. A dramatization of the incident that started the civil rights movement -- Rosa Parks' refusal to give up her seat on a bus -- has been performed by Chapel Hill Transit employees during this employee celebration. Thank you to all employees for their participation. In the words of our former mayor, Howard Lee: This has to be more than just a day of celebration; this has to be a day of renewed dedication.

The following is an excerpt from Dr. King's "Drum Major Instinct" sermon, given on February 4, 1968. Dr. King encouraged his congregation to seek greatness, but to do so through service and love.

You don't have to have a college degree to serve.

You don't have to make your subject and your verb agree to serve.

You don't have to know about Plato and Aristotle to serve.

You don't have to know Einstein's theory of relativity to serve.

You don't have to know the second theory of thermodynamics in physics to serve.

You only need a heart full of grace, a soul generated by love. And you can be that servant. 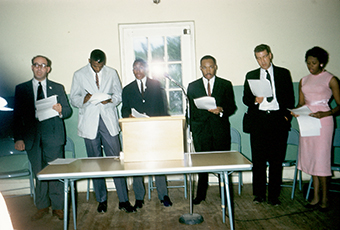 Dr. King visited Chapel Hill in May of 1960. Among his stops was the African American community center, which is called Hargraves Community Center today. On that Sunday and Monday, King gave four talks – to the local black community, at University Baptist Church, as a guest speaker in a UNC-Chapel Hill classroom, and his main speech in Hill Hall on campus on Monday night, May 9.