Friday, July 3 is a Town holiday. Chapel Hill Transit will not operate July 4-July 5. Yard waste will not be collected Friday, July 3. The July 4th Community Celebration has been canceled. More Information

No mask distribution on Saturday, July 4. 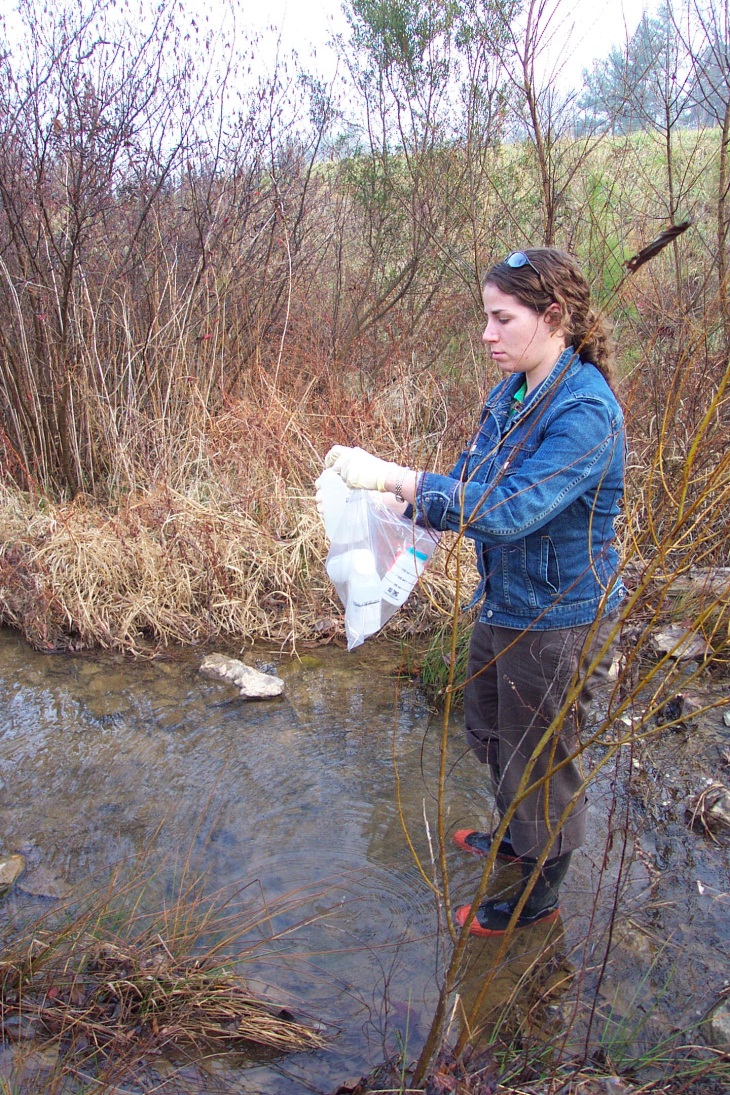 Note: Water chemistry testing was discontinued in 2010. The Town began to monitor watershed health through macroinvertebrate counts (biological monitoring) in the spring of 2011.

What Does Water Chemistry Tell Us?
Water chemistry can be monitored to get a “snapshot” of water chemistry conditions at a point in time at a particular location. Monthly or more frequent monitoring may give a good picture of conditions and trends in water quality when studied over several years and when a broad suite of common chemicals and bacteria are analyzed. However, infrequent monitoring cannot trace occasional spikes in concentration of tested parameters outside of the testing day, nor has the Town included expensive testing for toxins on a routine basis.

Water chemistry monitoring can include analysis of naturally-occurring or manmade chemicals. Testing may include single elements (such as sodium) or compounds (such as nitrate), dissolved or in suspension in the water column. Testing may include parameters such as pH, alkalinity, temperature or specific conductivity, which affect how chemicals react in water.

How Is Water Chemistry Monitored?
Town staff, between 1994 and 2010, collected water samples as “grab” samples - one dip of a sample bottle into the center of flow at the stream’s surface. Occasionally, water samples were collected that were depth- or width-integrated, meaning that we collected small amounts of water through the depth of a stream, or across its width, that were combined and analyzed. We also mixed samples across a time period, such as through the duration of a storm, by taking a set volume at a set time period and mixing these into a single sample. Water samples were then sent to a laboratory for analysis.

The Town will conduct occasional spot-checks of water chemistry in response to reports of dumping or spills that have reached the storm drain system or streams and waterbodies. Analysis is usually done with chemical test strips, although in some cases we may send water samples off to a laboratory for analysis.

Town Monitoring & Results
Chapel Hill’s first water quality monitoring program was proposed in 1993 to gauge the effectiveness of management programs, establish a baseline stream chemistry database, and monitor the conditions of the Town’s major streams and watersheds. From 1994 to 2009, Town staff collected water samples at 13 sites around Chapel Hill and Carrboro representing all major watersheds.  Samples were collected once per month and at least 48 hours after rain in order to get non-storm flows, or “base flow.” At each site, we collected basic information about the water using a water quality meter: temperature, pH, dissolved oxygen, and specific conductivity. Bottles of collected water were sent to a laboratory and analyzed for fecal coliforms, turbidity, total suspended solids, total dissolved solids, phosphorus, ammonia, nitrate, nitrite, total Kjeldahl nitrogen, lead, copper, and zinc.

We generally found that temperature and dissolved oxygen showed a strong, expected seasonal trend, and occurrence of dissolved metals was rare. There were few strong trends to the other chemical parameters except at a few sites. The results are highly variable, but instructive to show the range in values. To detect trends in this highly variable data, Town staff is considering restarting monitoring at a limited number of sites with biweekly sampling taken irrespective of flow.

Water Quality Parameters – what do they mean?
The State, the Town, and other groups monitor waterways and measure various characteristics to determine water quality. With regard to water chemistry, these characteristics are known as “parameters” or “constituents”. Below are brief descriptions of the most common water quality parameters. Earth Force has more detailed information about the most basic parameters.

Temperature affects how well other materials dissolve in water, including gasses like oxygen.

pH is a measure of the acidic or basic (alkaline) nature of a solution. pH affects the solubility of many materials.

Total Dissolved Solids (TDS) is a measure of the total amount of material dissolved in water.

Total Suspended Solids (TSS) is a measure of the amount of non-soluble material suspended in the water column.

Turbidity measures how cloudy water is. It is the degree to which light traveling through a water column is scattered by suspended particles.

Fecal Coliforms are used to measure fecal contamination in water. It is usually presented as a number of colony forming units (CFUs), which approximates the density of individual cells in a sample.

Total Phosphorus is a measure of all phosphorus compounds in water, including the form of phosphorus most readily absorbable by organisms, orthophosphate.

Nitrate and Nitrite are often measured together. These are the most common nitrogen compounds found in water.

Total Kjeldahl Nitrogen is a measure of the organic nitrogen plus ammonia in a sample.

Ammonia is another form of nitrogen that is most readily absorbed by plants. It can dissolve in water to form ammonium ion.

Less frequently monitored materials include:
- metals such as lead, copper, cadmium, and zinc
- insecticides, herbicides, and fungicides
- natural materials common to soil such as calcium, potassium, sodium, and magnesium
- indicators of dumping or discharges such as detergents, chlorine, and petroleum products
- pharmaceuticals and compounds in personal care products such as triclosan and fragrances