The Barbee-Hargrave Cemetery is located near the Greenwood subdivision of Chapel Hill on land that once belonged to members of the Morgan, Hargrave, and Strowd families, early inhabitants of the area.

Mark Morgan was among the first settlers in the Chapel Hill area and owned land in an area called the ‘Chappel tract.’ Mark Morgan’s son, Hardy Morgan, inherited the land and received additional land grants from the state of North Carolina in 1779 and 1788. Much of this land was later donated for the establishment of the University of North Carolina at Chapel Hill. The Barbee-Hargrave Cemetery was part of Hardy Morgan’s land holdings. The land passed from Hardy Morgan to his son, Lemuel Morgan. However, Lemuel Morgan was forced to sell the property at auction in 1845 in order to pay off a debt he owed his cousin, William Barbee.

At the auction, Jesse Hargrave bought the property for $4300. The Hargraves owned the property, including the cemetery, for about 30 years before selling it to Robert Strowd. In 1928, the land was divided into sections and sold.[1]

The cemetery is located at the end of the Greenwood Road and is thus part of the Greenwood subdivision, a neighborhood conceived by Paul Green and his wife Elizabeth Lay Green in the 1940s and 50s. Green gave the cemetery portion of the land to the Town of Chapel Hill in 1958.[2]

The cemetery was in use from 1790 until 1915 for African American burials, predominantly slaves of the Morgan, Barbee, and Hargrave families and their descendants.  Mark Morgan is known to have owned six slaves in 1755 named Rafe, James, Nell, Cate, Jude, and Cloe. By 1777, in the inventory of his estate, he owned 22 slaves. Since at this time slaves were inheritable property, it is likely that these enslaved laborers became property of Mark Morgan’s son Hardy. As Hardy Morgan acquired additional land grants, adding to his father’s property, he may have also acquired more slaves. The majority of the graves likely belong to these African American slaves or their descendants. There is some possibility that the cemetery was used for white burials as well.[3]

Few of the graves are identified, but oral history tradition and interviews conducted with Hargrave descendants indicate that George Hargrove, who died in 1910, and his wife, Charlotte Hargrove, are buried in the Barbee-Hargrave cemetery. There are also stories of an engraved headstone that read “Thomas” and “1805.” It was estimated before ground penetrating radar that there were about 40 to 50 graves in the cemetery.[4]

By the late 1970s, the cemetery has fallen into disrepair. Margaret Robbins Davis, a resident of Chapel Hill, called for more attention to the cemetery and requested that a marker be placed in the cemetery to alert visitors to its historical importance. Davis felt that it wouldn’t “be long before the [Barbee-Hargraves] Slave Cemetery passes into oblivion, much as its occupants did, who were considered only three-fifths of a human and therefore not worthy of, in fact prohibited from, having their name on a marker.”[5] Advocacy of town residents and organizations, including the Men’s Garden Club and the Chapel Hill Historical Society, led to the placement of a plaque on the property, marking the cemetery as a final resting place and historical site.[6]

In May 2011, the Town of Chapel Hill Department of Parks and Recreation contracted Preservation Chapel Hill to conduct research on the cemetery and ensure its preservation. PCH worked with Scott Seibel and Terri Russ of Environmental Services, Inc., to locate and record possible unmarked grave shafts. Seibel and Russ utilized geological and archaeological methods, including pedestrian inspection, soil density testing, and using a total station to record locations of possible graves. These methods of analysis involved taking note of depressions in the ground that might indicate a place of burial. Disturbed soil, which might indicate a grave was dug in a particular location, is also less dense than non-disturbed soil, thus soil probing can indicate the location of burials. Through the use of these methods, Seibel and Russ found that there were 53 potential burials, 24 of which had a stone marker while 29 had no observable markers. [7] Most of the potential graves were located in noticeable rows, making them more certain. 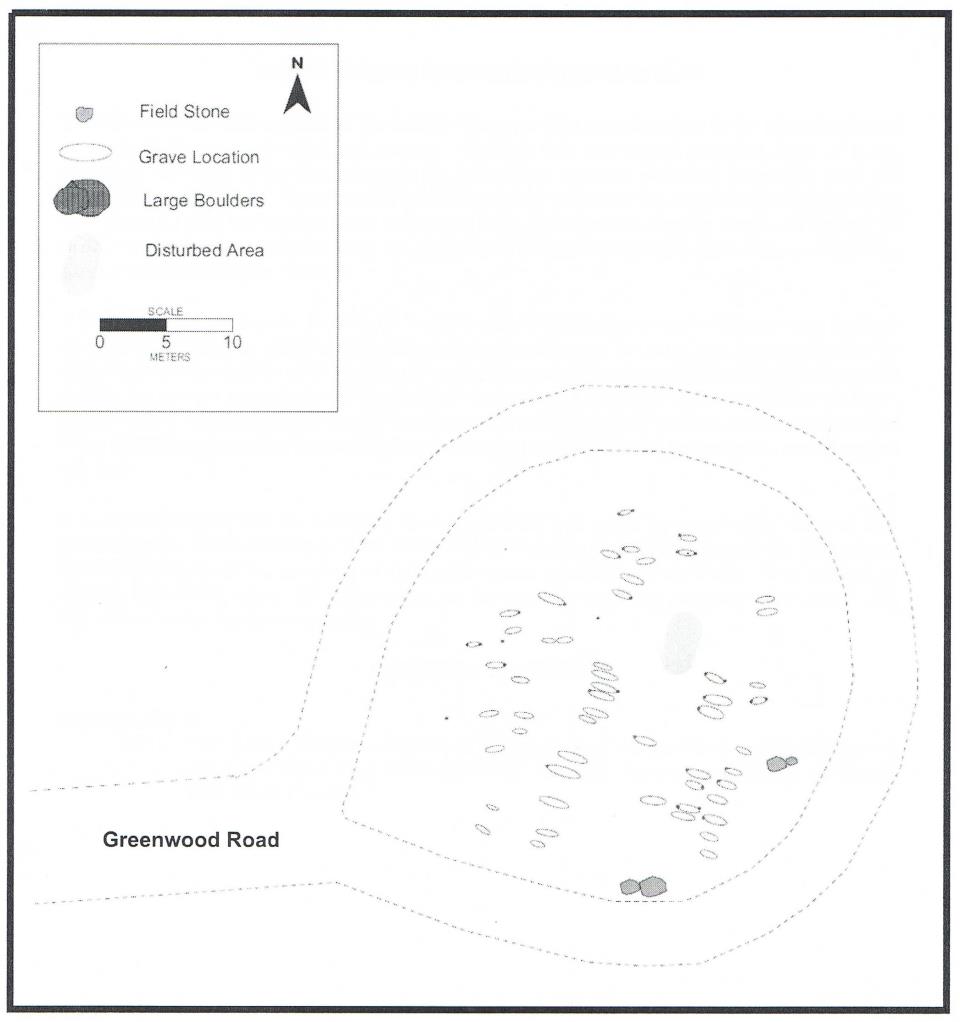 Investigation of the Barbee-Hargrave Cemetery by ESI, Inc.

[2] Deed between Paul Green, Elizabeth Lay Green and the Town of Chapel Hill, 1958, in the Chapel Hill Historical Society Collection.